So far Annina has provided excellent commentary about many aspects of our journey from the perspective of a 12/13 year old but I’d like to add a few words about the Atlantic crossing itself, as this was the greatest challenge and accomplishment of the entire 6500 nm journey from Sweden to St Lucia. The crossing itself was in two parts- Las Palmas to Cape Verde and then to St Lucia.

We were extremely apprehensive about the first 900 nm leg as the weather forecast set us out into conditions that we have never experienced before and would certainly have avoided if not committed to set sail at the start of the rally. Three to four meter waves and gusts of force 7/8, perhaps higher in the wind acceleration zone, forced the ARC+ organisors to place a way point to the east to keep us away from the heaviest weather. At the start of the rally, we held back to avoid the competition with the other yachts; the waves even here were large enough to hide the hulls of the boats next to us. With the conditions as predicted, we turned south as soon as we reached the waypoint and with the seas directly behind us we eventually found the wind shadow of Gran Canaria where the conditions were a little more bearable.

On the morning of the second day, our crew, Walter, an extremely experienced sailor with whom we have sailed before and had never experienced seasickness in his life, became incapacitated by extreme nausea and went down to his cabin, remaining there for the next three days. For this, we had not planned, and rather than having a crew of three with a rotating three hour watch plans, we had to improvise with a crew of two to look after two children and a sick adult in rough seas. Walter was extremely ill and we were quite worried, checking on him often.

As we travelled through the wind shadow, we moved to the back of the pack as most other boats raced on towards Africa in the strong winds. We dropped back to position 70 or so out of 96, but after a day or so, despite being double handed, we found wind and with a poled out genoa averaged 7 knots for a few days in a row eventually moving up to around 40. The waves remained three meters until around day four when our trusted crew member recovered and immediately set out for the foredeck to trim the spinnaker pole.

After just under 6 days we made it to Cape Verde and heard many stories of ripped sails, snapped sheets and halyards and broken autopilots. We were very happy that Walter recovered and decided to continue on the second leg.

The second leg of 2084 nm was a different story- easy downwind sailing the entire way. It is difficult to remember what we actually did and in my mind I remember the day we started, the day we tried the gennaker, the day we caught two fish and the day we arrived. I think I read a book and we did some homeschooling. Most of the rest of the time I enjoyed simply looking out at the beauty of sea, day and night. Quite often, especially when on night watch I would hope that Walter would not wake up for his watch so I could stay longer in the cockpit enjoying the sounds of the waves in the darkness.

We caught five fish in total: three Mahi Mahi, one wahoo and a tuna; the best fish we ever tasted. We trolled with handlines and had a system in place when we had a fish- one person would pull in the catch, Andrin would soak the back of the boat with water so the blood would not stain the deck, Seraina would be ready with some gin to pour into the gills to humanely put the creature to sleep before preparing.

After 14 days, we arrived in St Lucia and had to, rather embarrassingly, quickly re-learn how to sail upwind to cross the finish line. Then the parties started, although it was also a little anticlimactic as our lives had been focused on this journey for many, many months before. On the other hand, we still can’t believe we made it after learning to sail in Greece only in 2016.

But we are certainly not finished with sailing… 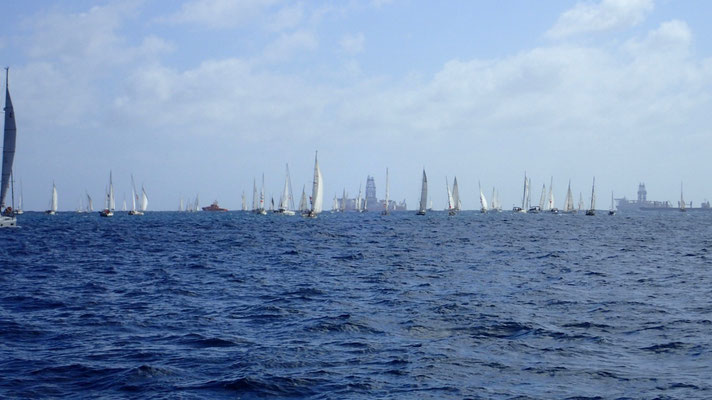 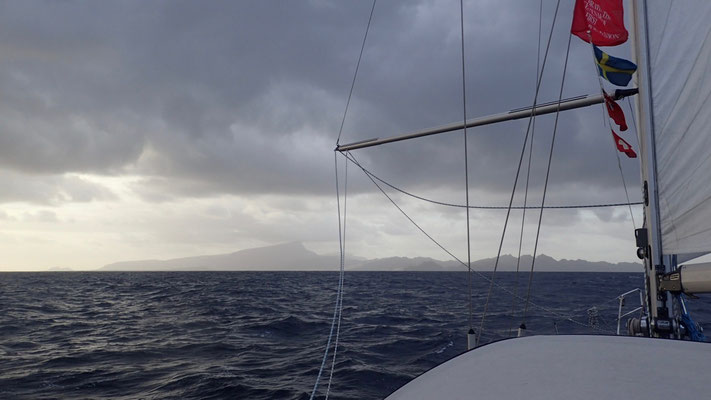 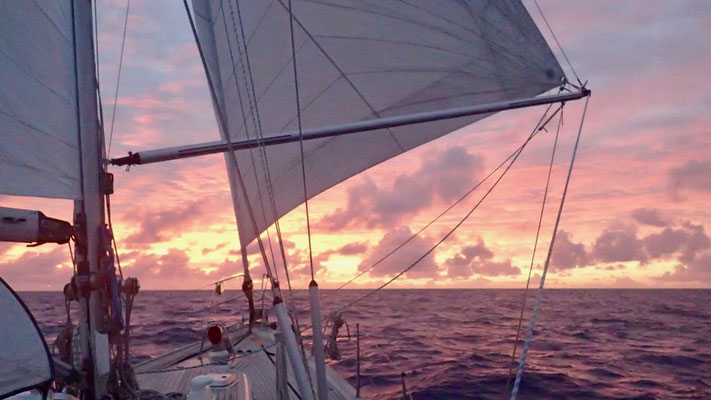 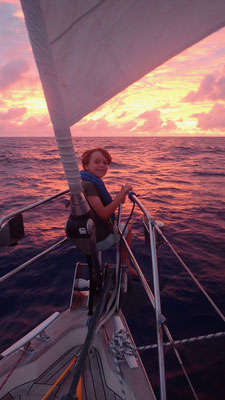 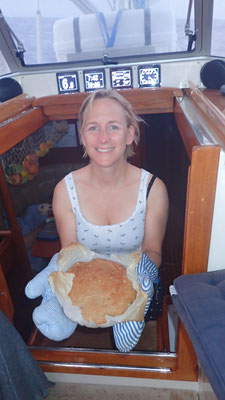 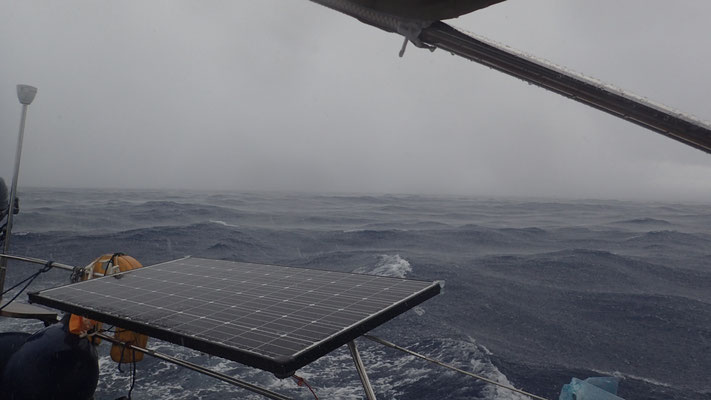 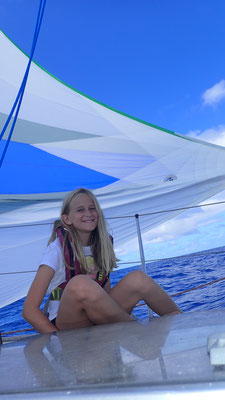 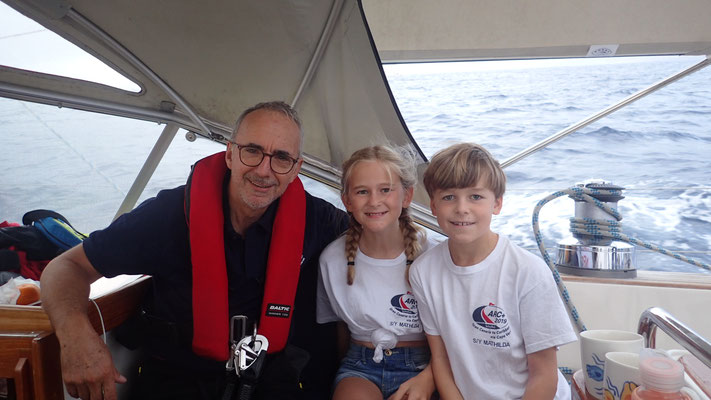 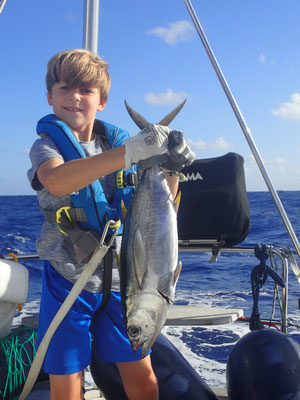 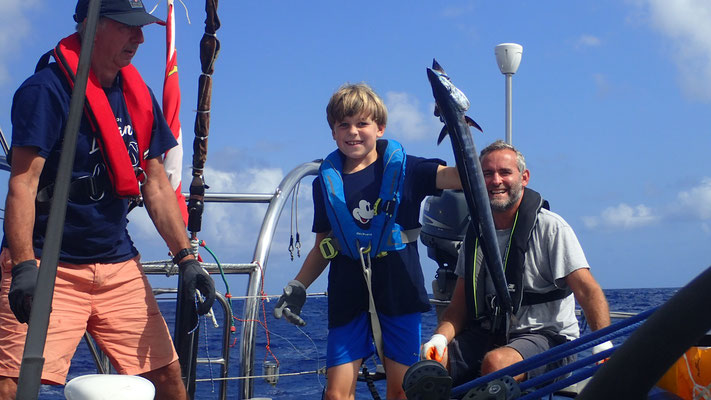 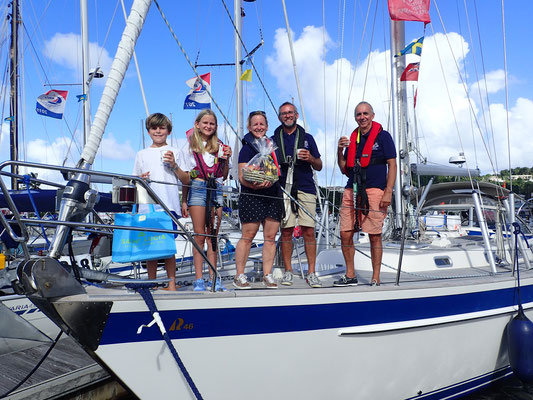