A day in the Life of Autopilot Lilo

I was working all night and since I had nothing else to do I just watched my owners having nightshift, which was quite amusing. Richard was eating loads of cookies (as always in nightshifts); Seraina had problems with staying awake and Walter was just having a lookout, looking at the stars and the moon and eating some bread. At about two o’clock in the morning I was thinking how they would react if I suddenly turned 180 degrees and went back the way we came, but then I thought that maybe something would break, because of the sails and the wind and they would probably exchange me because they think that I am broken and I would not like that, because I love my job. So I decided to just continue the course that they wanted me to go. After the crew had some eggs for breakfast the two kids on board did some maths and the girl (called Annina) also did two blog entries later. After all the homework Seraina made chirashi for lunch with the fish that they had caught the day before. It smelled and looked so nice that I nearly got a bit sad that I don’t eat food and that I only get energy from the lithium batteries, and that if they are low I feel weak and I cant do anything about it and I just have to wait until my owners charge the batteries. However the chirashi smelled really nice and the crew seemed to like it, because they ate it very fast. After lunch I started getting quite annoyed that the crew didn’t trim the sails so I don’t have to work so hard, but after a while my anger went away and I liked my job again. The crew was messing around with the sails a lot so we would go faster, but they never did the right thing and I just wish that I could speak to them, so I could tell them what to do, since I know what to do, because I have been a sailor for my whole life. Late afternoon Annina baked a chocolate cake – mmhhhh, it smelled delicious! Later they ate it and celebrated a little boy´s birthday that wasn´t on the boat.

Then the kids stayed in the cockpit for a while and were talking a bit, when suddenly a flying fish jumped up into the cockpit (that has never happened before) and then it landed right on Annina, she panicked and jumped up and started screaming. Walter and Seraina put it out and then Annina went for a shower, because the fish stank. I felt sorry for Annina, but I was also quite funny. Then Annina wrote another blog entry and then they got ready for bed (of course I don’t sleep). This is about how my day routine looks while out at sea.

Translated from Autopilot language to english from Annina. 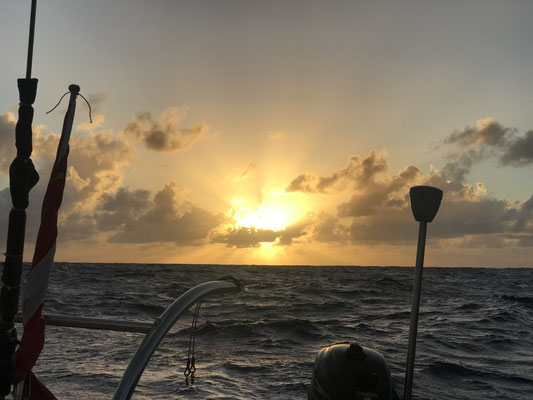 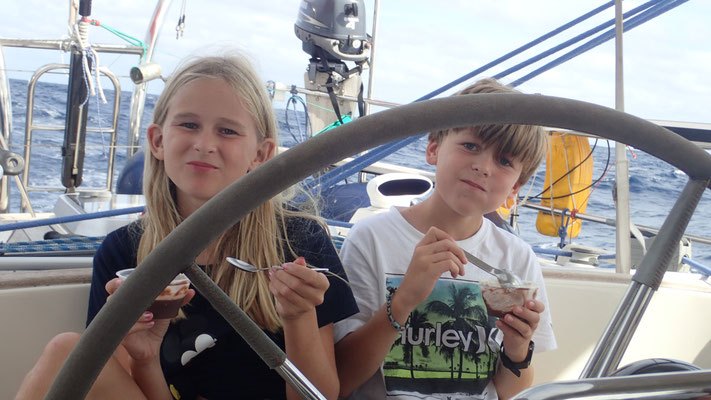