I thought that instead of always just writing about what we did, I could write about the people we met.

We met a lot of interesting people on our journey so far. I am going to tell you about our new “friends” in Orkney.

When we first came into the harbour, one boat caught our attention immediately, it was also a Hallberg-Rassy and it had a Swiss flag. Mami went to talk to them. The boat was called “Anika” and the owners, Heinz and Ursula, were very friendly. They came through the Caledonian Canal (where we were heading to) and were on their way to Orust (Sweden), the same island where we started our trip. We spent a lot of time with them and visited each other’s boat and one morning when we woke up we found a bag of fresh croissants in our cockpit – it was a fantastic surprise from Heinz and Ursula.

Next we met Kenny, the harbour master. He is retired from his normal job and does this now as a fun job. He comes to the marina twice a day and he knows all the boat people and is really friendly to everyone and gives the sailors a lot of tips about Orkney. The funniest thing is Kenny´s office. It´s a normal door, but behind the door there are only a couple of shelves where he stores all his office material. He even uses the shelf as his desk.

One morning Andrin and I were rowing around the marina in our dinghy. We saw a little boy standing on shore and watching us. We asked him if he wants to come to for a dinghy ride with us. His name was George and he was 10 years old. He lives in Orkney and he told us loads about fishing. So we went fishing together and caught a lot of small fish.

One of our neighbouring boat was called Ruby Tuesday. Papi started talking to the people on the boat first and from then on we talked with them every time we walked passed. The man is from New Zealand and is a retired environmental engineer and the woman is originally from Germany but the both live in the UK for many years. They were very friendly people and the woman even brought us some DVDs.

In Kirkwall we walked into a shop with organic products. Then we discovered that the back of the shop was also a hardware shop. When we went to see if they had things we could use for the boat, we heard a lot of noise upstairs. So we walked up to see what was going on. There was a group of people, some of them were dressed up in Viking clothes. Immediately two boys came up to us and asked us if we want to try on their costumes. They were very helpful and showed us how to wear the clothes and hold the shield. The boys were 8 and 10 years old and they were from Shetland and came down to Orkney to meet some Orkadians (this is what you call people from Orkney). The boys told us that there father was the ferry man from Unst (a island in Shetland where we went hiking when we where there) and their mother had a strawberry farm and was the cook for the school. They also told us that they were only three kids in their class. It was special to meet them at this place where we landed by coincidence and it was interesting to hear about their lives. 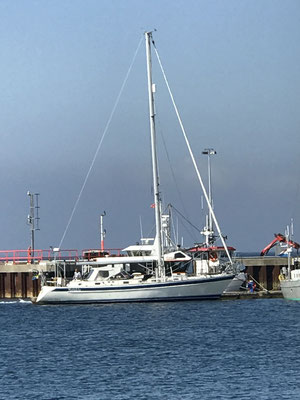 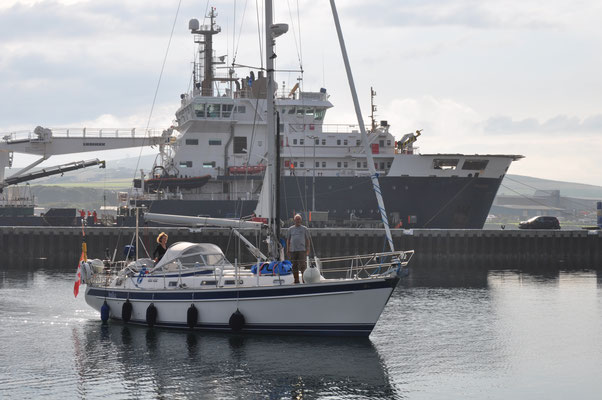 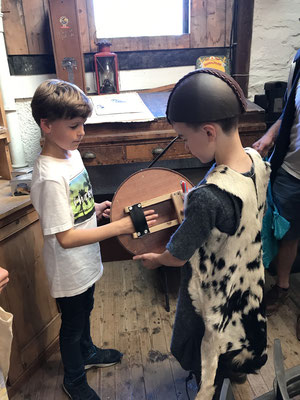 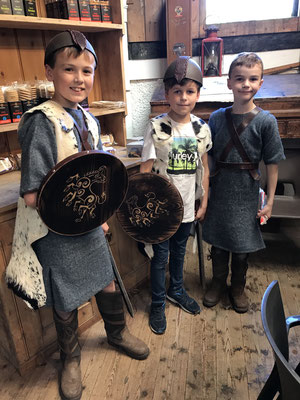 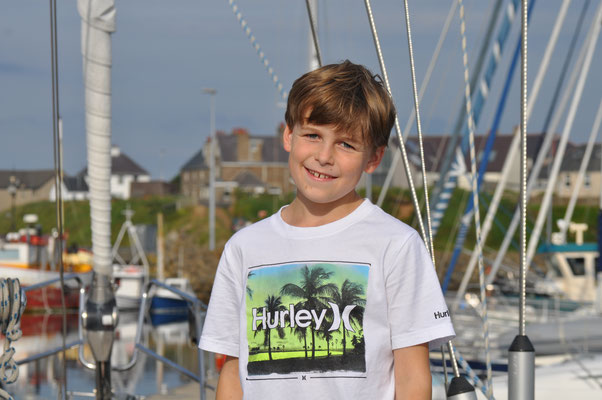